They traveled to Seattle to see who would win the $25,000 even though they did not qualify to participate in the competition.

The Vita Chiquita Salsa team said they formed to compete in Clark’s own Pitch Fest. They hoped that the combination of a family recipe and coaching from Pitch Fest would prepare them to compete in the Dempsey Startup Competition.

The Dempsey Startup Competition is for college entrepreneurs throughout Washington, Oregon, Idaho and British Columbia. Teams present their ideas and business models to a panel of judges to compete for venture capital to grow their businesses.

Vita Blanco, president of Vita Chiquita Salsa, agreed. She said there was a lot to learn just watching the finalists compete. She was excited to bring back that knowledge to Clark and share it with other entrepreneurs.

The salsa team was one of eight teams that participated in Clark’s Pitch Fest in Fall of 2018. Webster said Pitch Fest is a contest designed to identify student businesses at Clark and help them reach their goals through mentor-ship and real world experience. Webster said he hopes Pitch Fest will help student entrepreneurs be more prepared to enter the Dempsey competition if they want to.

Blanco said the questions the judges asked at the Dempsey Challenge were similar to what the judges at Clark asked during Pitch Fest. Hearing the responses from the other startups really gave her some insight.

“When I come back next year I’m going to be more prepared,” Blanco said.

After watching the finalists, Ngawang Choephel, the accountant of the salsa team, said he knew that the salsa team needed improvement.

“We had a bunch of stuff on there that shouldn’t have been on there, instead of putting on our business statistics,” Choephel said of the team’s application for the challenge.

The Dempsey competition was at the University of Washington. Although Choephel previously attended the school, Blanco said she was surprised the school campus was so big.

Webster is not shy in saying there are better and larger entrepreneur facilities at other colleges. 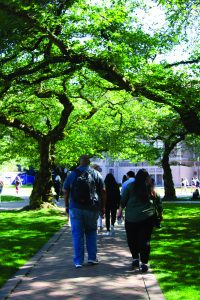 Portland State University’s business accelerator is 40,000-square-feet, but Webster’s goal is to bring awareness and opportunities to Clark, not to duplicate Portland State’s program.

“They are the lighthouse, they are the benchmark,” Webster said. “But they said you don’t need to be like us.”

This year in addition to Pitch Fest, Entrepreneur Day and Entrepreneur Fair, Webster said the program will host field trips as well.

Webster said that possible trips could include visiting Portland State’s business accelerator or a Vancouver Business Journal event. Webster said the events will be a good fit for students in any stage of starting a business.

“This is for the students that do want to go to the next level, those places that we’re going to go to, they will have a plethora of resources that we as a college are nowhere near to offer,” Webster said. “We can be great facilitators in that regard.”

Webster talked about starting a business and said starting one after finishing college works fine, but starting it while in college has some benefits.

“It will help you in regards to having a support system, learning how to work with others, refining those true talents that you do have,” he said. “It’s going to help you be more aware that you definitely can not do it all.”

“In the real world there is no safety net,” Webster said.