Tag: Office of Diversity and Equity 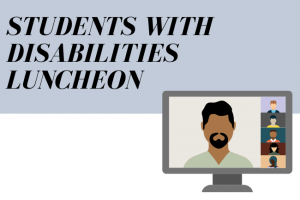 Campus Home Page In The Spotlight

Clark Alumnus to Speak at Students with Disabilities Luncheon

Clark College alumnus Miguel Viveros Chavez will be a keynote speaker at the virtual Students with Disabilities Luncheon this Thursday, Oct 21 at noon. To celebrate Washington State’s Disability History Month, the Diversity Center welcomes students with observable and unseen disabilities as well as allies to join the luncheon. Viveros […] 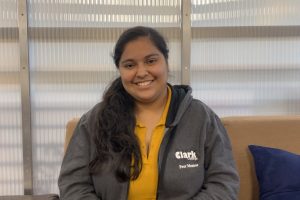 Pursuing a higher education comes with difficulties of various shapes and sizes for many students. That doesn’t mean, however, that you have to go through it alone. Abby Chicas, a returning Clark student, voices this sentiment with a warm smile as she sits on a plump beige couch in the […]

Clark’s Students of Color Luncheon Will Be Hosted Online Monday

On Monday, at 11:30-1:30, The Office of Diversity, Equity and Inclusion will host a Students of Color Brown Bag Luncheon. This particular meetup won’t have food as it is virtual.  The Zoom gathering is to bring people together. There will be a keynote speaker and time for students of color […] 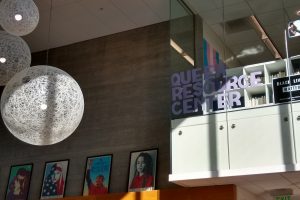 Clark College’s Queer Penguins and Allies club has decided that LGBTQ+ students need their own space on campus. They have plans to advocate for the construction of a Queer Resource Center over the next academic year. QPA Vice President Rebecca Strizver said the school administration could green-light a […] 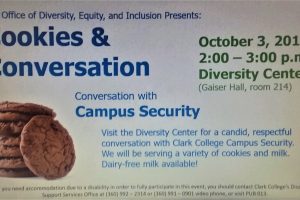 Students are Invited to the Diversity Center for Cookies and Conversation With Campus Security.

The Diversity Center invites students to join them for their Cookies and Conversation Series: Campus Security. Students are encouraged to attend and ask campus security questions they have about the campus. “The intent of the event is to provide attendees an overview of the services the Security & […]

Two biased-based incidents shook the Clark campus last Monday, prompting the Bias-Based Incident Response Team to send an email Thursday identifying the events. The email identified the first incident as graffiti, that has since been removed, containing racial slurs and symbols in the Foster Hall men’s bathroom. The second incident […]

Nathan Baird and Steven Mitchell also contributed to this story. The Clark campus was alive on Tuesday with neon-colored tulle skirts, tie-dyed clothing and LGBTQ pride flags sticking out of people’s hair, backpacks and pant pockets. PRIDE Day was underway, with events going on from 9 a.m. until 10 p.m., organized […]

During Winter break 2015, students and administration began drafting a seven-point proposal that they believe would make Clark a more welcoming environment for LGBTQ, Intersexual, Asexual and Pansexual students. The proposal was created by Clark’s Office of Diversity and Equity, along with student group Queer Penguins and Allies, and is […]

President Bob Knight and the Office of Diversity and Equity hosted a public forum to discuss the college’s Social Equity Plan on Wednesday in Gaiser Hall, which aims to make Clark more accessible to disadvantaged groups. “This plan will be embedded in everything that we do,” said Knight, as he […]

By Marvin Peña in News Clark will be offer a workshop called Dreamers 102 tomorrow 9-11 a.m. in Gaiser Hall 205. The workshop is planned for Clark faculty and staff from different departments. Clark’s Office of Diversity and Equity has organized the workshop for several years. The goal is to […]

@ClarkCollege's annual State of the College Address presented by President @Drkarinedwards will be held in-person this year on Jan. 20. Read more about this event in my story for @ClarkIndyNews below!

http://clarkindy.com/2021/11/04/downtown-luminaria-honors-dia-de-muertos/
In honor of those who have passed before us, The Vancouver Ballet Folklorico hosted the Luminaria. A celebration of Dia de Muertos in downtown Vancouver.
To learn more check out @ClarkCollege @ClarkIndyNews for more of the story!

"The Haus of Luna" is a new art installation in Vancouver created by @ClarkCollege alumnus Sol Cejas. Learn more about this 7-room experience that engages all 5 senses in my story for @ClarkIndyNews below!