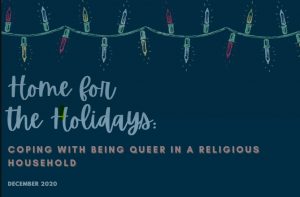 Editor’s note: This piece discusses self-harm and other sensitive topics.

The relationship between queer people and religion is not always an easy one to navigate. Often people who are born into religious households are left with traces of internalized heterosexism that follow them into adulthood.

Maddison Parks, a 17-year-old Clark College Running Start student, identifies as bisexual and found that her religious upbringing didn’t affect her much, but still brought repercussions.

“My dad wanted us to figure it out on our own what we wanted religious wise,” said Parks.

Parks’s dad identifies as a Jehovah’s Witness and her mother identifies as Christian. Parks said that her father was the one who wanted her to grow into her own person and not be influenced by others or society.

In the beginning, she felt she had no outlet to process the emotional distress she was experiencing while discovering her sexuality. Parks said that overhearing the homophobic banter surrounding her led her to self-harm.

“Sixth grade me [didn’t want to] to tell anyone about this girl crush,” said Parks. “It hurt me emotionally to not be able to tell anyone, which later manifested itself in physical pain.”

Later on, Parks met a friend who she could confide in and who was struggling through similar issues. Parks recalled that they helped one another instead of harming themselves.

While Parks may not be out to her parents yet, she found other people with who she could be true to herself around.

If you or anyone is part of the LGBTQ+ Community and is experiencing any mental health issues or is in need of support, please visit the following sites for help: