Born in Miami to Asian immigrant parents, Lu is Chinese, Taiwanese and American. She draws inspiration for her art from her experience growing up in American in an Asian household.

According to Lu, her work features manipulations of traditional Chinese art to represent the Asian American identity.

“A lot of my work does have to do with identity, and specifically using my own identity as a reference point,” said Lu. “Thinking about what it means to be Chinese, Tawianese and American while not really being able to be accepted as either fully.”

Much of Lu’s art showcases still lives of fruit found in Chinese markets, some of which she says have “bleeding spots to stress the struggle that immigrant groups have in the U.S.” 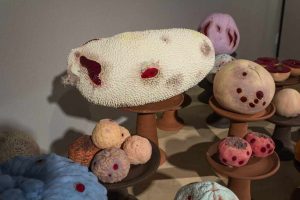 Lu also replicates traditional Chinese artwork and tales to create art that fuses the multiple aspects of her cultural identity together. To Lu the combination of more than one culture creates a new third culture, as opposed to one’s identity being made up of fragments of each.

“I think a lot of times people try to simplify the experience of being bicultural,” said Lu.

The next Clark Art Talk will be on Jan. 20 and will feature mixed media photographer Vanessa Marsh.