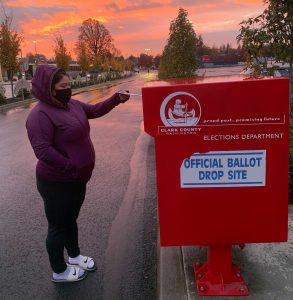 The 2020 presidential election has proven itself to be one of the most unusual elections yet and for many Clark students, it was their first time voting.

Days after the polls closed it is still unknown whether President Donald Trump will stay in office, or be unseated by former Vice President Joe Biden. However, it is clear that Americans are eager to have their voices heard.

Tiffany Kirks is a 19-year-old Starbucks barista and first-time voter. Kirks, who is in her first year at Clark, says she was skeptical about voting this year.

Clark student Marco Roo also wondered if his vote would really matter in the election. He was 18 years old during the last election but decided to pass on voting.

“I didn’t think it would make a difference back then,” he said. “But this year my friends really pushed me and I knew it was the right thing to do.”

According to USA Today, four days before Election Day, 85 million people had already cast their votes. Of those people, roughly 6.2 million were first-time voters, compared to the 4.4 million first-time voters at the same time in the 2016 election

With graduation coming up next month, all 7 of Clark's ASCC student leadership positions are open for new members. The due date to apply is May 14.

Read more about the positions and how to apply below.

Virtualandia's poetry slam event had amazing performances that highlighted emotions and talent. Jordan Wolmut was named champion of the event.

Read all about the event below!

Read more about the event below.

Breaking news! While visiting Vancouver today, Jay Inslee announces that he is considering mandating the COVID-19 vaccine for community college students returning to the classroom this fall.

Read more about it below!

To learn more about the event, click the link!