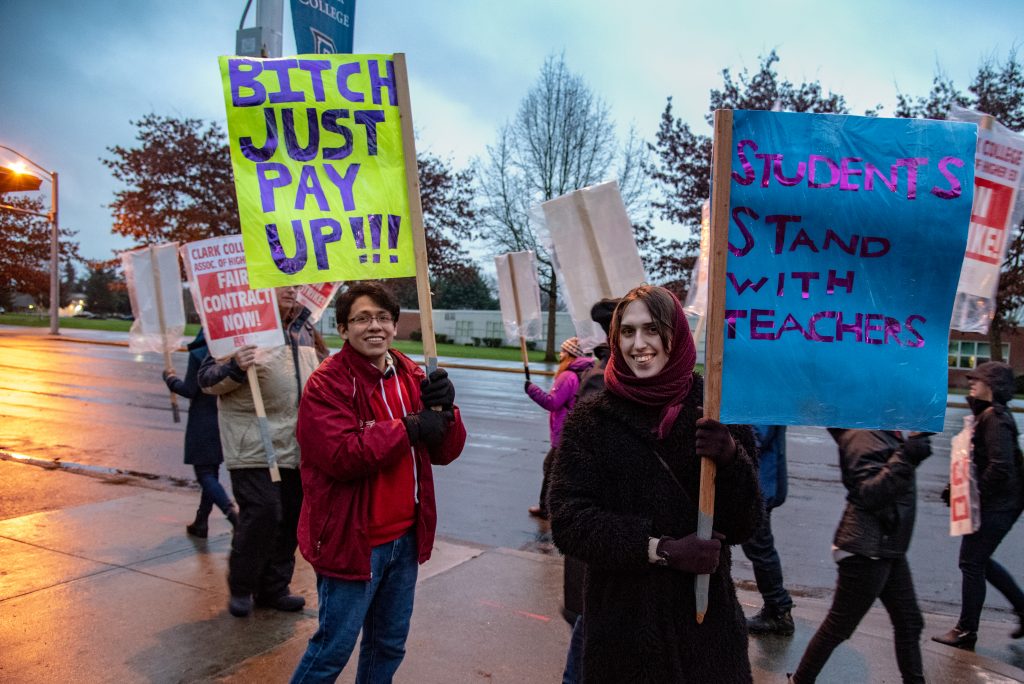 It’s only the beginning of the Winter quarter and the only students on campus are standing next to their instructors on a picket line. On Jan. 13, the first ever Clark College strike shut down all campuses. The only sounds on the main campus consisted of blistering wind, splattering rain and the echoes of chanting educators.

Clark students were left wondering what they should do with their newly acquired free-time. Some students picked up extra work hours, more than a few took the opportunity to sleep in, and some carried on with their coursework like everything was normal. Meanwhile, there were a few students who bundled up and braved the bad weather who to march beside their instructors.

Draped in several layers of red, students Ian Cruz and Blake Jordan traded in their time off for a couple days of picketing with their professors. Cruz has been attending Clark College for a little over two years where he is studying chemical engineering. Cruz said he’s really enjoyed his experience at Clark.

Cruz and Jordan arrived early Monday morning and stayed on the picket line for most of the day. Cruz said he prepared to come back every day until the strike ended, despite how tired or sore he may be.

“It’s important to me to support the teachers; to make sure that their voices are amplified and to show that we are united as a college community.” Cruz said.

Jordan is now in her second quarter at Clark where she is a part of the women’s studies program. She shared why it was important to support the instructors.

Numerous instructors were excited to see student support. As head of the Chemistry Department at Clark, professor Nadine Fattaleh said she’s tired of losing part-time instructors. So after dropping her daughter off at school that morning, she reported to the picket line.

“I wish them all well, but I understand why they’re taking better positions,” Fattaleh said. “I wish I could stop that flow and that’s why I’m out here.”

Fattaleh started teaching at the school in 2002. Her fellow instructors and her students are what she loves most about Clark. Fatelleh shared her appreciation to several of her students, such as Cruz, who marched on the picket lines in solidarity.

“Ian’s got some amazing energy right now, and I’m so thankful for that!” Fattaleh said.