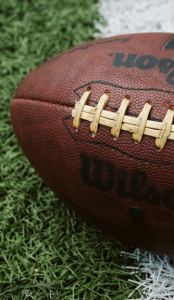 On Oct. 29, 2019, the NCAA changed their rules to now allow student-athletes to receive payment through endorsements. Multiple Clark College student-athletes have stated that being a college athlete is a big commitment; they get little to no free time and it’s like having a full-time job. However, they’re only getting paid through scholarships. The NCAA changes that, but not for all athletes.

Clark College fitness aid, Kerry Perry, said that student-athletes should be paid, but not based on their popularity or how good they are. If college athletes are getting paid by how well they’re known, then the starters are going to make the most money, especially if they’re one of the top players on the team, said Perry. Most sports fans don’t pay close attention to the backups.

“It should be based on how involved you are with your team, if you’re volunteering outside of your sport, and what you’re bringing together,” Perry said. “If you’re a bench player and you’re doing those things, then you deserve more recognition. It shouldn’t be solely based on who’s out there on the front of the line. You could be talented, but not as involved in team building activities as well as the community like other players are.” 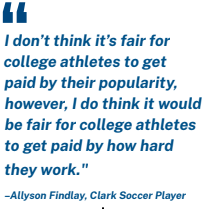 Paying college athletes is considered special treatment by some. They think it’s like treating them as professional athletes while others disagree. “No. I think that if you’re putting something out there, making an effort, and doing something extra,you’re not just going to college, but you’re taking all of this extra time to represent your school,” Perry said.

Assistant Hospitality Business Management Professor at WSU-V, Bamboo Chen, supports the idea of student-athletes getting paid but is aware of some flaws that need to be patched up. He said he thought the NCAA needs to make sure this is a level playing field for the backups. This goes for all sports, even the sports that don’t have a big following.

Student-athletes can do things outside of their sport to get recognized, but student-athletes who play less popular sports will have a harder time getting paid for their endorsement.

“Football is the most popular college sport and after that comes basketball; this doesn’t just apply to football,” Chen said. “There are several other sports such as volleyball, soccer, track and field, softball, etc, but not a lot of people pay attention to those sports which is sad.”

The popularity of college football has put the players on a higher platform when it comes to their popularity.

“They’re big icons on campus; this rule has professionalized the NCAA, and there’s a danger with that,” Chen said.  “The NCAA is already commercialized. The problem is universities and the coaches benefit from that, not the players.”

While the school pays the coaching staff and the athletic administration, Chen thinks the students should be paid through a different business. “If Nike, Adidas, Under Armour, Jordan or any sports brand wants to endorse a student, then they should allow that, but not through the school. It should be through private businesses,” Chen said.

Paying student-athletes based on how well they’re known could be unfair to the players on the bench, but they can do something about it. “I think that would be frustrating for the players that aren’t starting, but rather than playing the victim they can turn it into a way to motivate them and put in more work in the off-season and during the season to figure out what they need to do better,” said Findlay. My coach, Jeff Catangnola, says that if you’re not playing and that’s making you miserable, but you don’t try to figure how to get off the bench, then you’re choosing to be miserable.

“I do think [giving student-athletes endorsements] brings some special treatment by giving some of the players the ability to be paid and endorsed, but I also have the standpoint that if they earn it, it’s fair,” said Findlay. You would like to think that everybody has an equal opportunity, but getting an endorsement is often about who you know. So that’s unfair.

“Overall I think hard work pays off and I think it is fair for the people working hard to get something in return,” Findlay said.