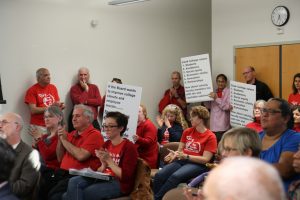 Faculty packed the board meeting and spoke publicly about pay negotiations but the board declined to comment.

On October 23, faculty arrived as a group for the monthly board meeting at Clark College. Many were wearing the red shirts that have become familiar over the last year. Some were carrying signs that read  “Stop wasting time and negotiate fair and equitable faculty salaries.” Early in the meeting board member Jane Jacobson addressed the faculty. “We’ve been asked by the college faculty and staff to make comments on the collective bargaining process, and we won’t be making them,” Jacobson said.

Kelly Love, chief communications officer for the office of the president, made a statement to the Indy after the board meeting. Clark College is negotiating in good faith with our faculty,” Love wrote. “Clark College can not disclose information about the offers discussed currently because of restrictions set by the mediation process.” The lack of comment from board members did not stop faculty from speaking about the topic.

Suzanne Southerland was the first one to speak after the board opened the floor to audience statements. The AHE President Southerland said that she was speaking on behalf of the staff and faculty.

“What we’re concerned about is a crisis around faculty salary negotiations,” Southerland said. “We don’t want those to break down, but from common practice and past practice here at Clark what we have seen is waiting and waiting and waiting until we are in a crisis state and that is what we are seeing right now.”

Some faculty expressed that their best bet to get a raise might be to look elsewhere. “I’ve had an offer to go teach at a local high school,” said Gerard Smith.

Smith who is retiring in three years said he does not want to go work at a high school, but they are offering a $15,000 a year raise. “It’s really tempting,” Smith said. “Wow that $15,000 over the next three years would surely buff up my retirement account.”