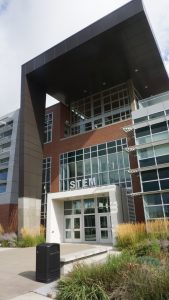 The first day of anything is hard. It could be a new school, a new class or a new job. Imagine if you walked into that brand-new setting and realized you were the only woman.

That situation has become increasingly common for female engineers. The fields of Science, Technology, Engineering and Mathematics (STEM) are becoming the ideal choice for a dependable career. In 2016, Clark College built a new building to house the growing program. Yet as the program grows, so does the gender gap. Especially when it comes to engineering.

On the surface the situation might not seem like such an issue. Recent counts show women holding their own in biology. According to the National Girls Collaborative Project website, over half of the undergraduate degrees in biology are earned by women. The website Catalyst puts that number at 59%. The statistics remains in the 50’s for master’s degrees and Pd.D.’s.

The problem becomes apparent in every other field. The numbers drop dramatically the further you go with mathematics at 43%. Physical sciences are lower at about 38.5%.

Statistics are one thing. Experience is another. Clark College engineering professor Tina Barsotti has firsthand knowledge with the gender differences in the field.

“My mom was always like, ‘You could be a doctor!’ and I’m like, I don’t like anatomy and physiology,” said Sarygin. “I like math and physics, and . . . for some reason in my head I wasn’t ever like ‘I’m going to do engineering!’, because no one ever told me.”

“When I was growing up I wasn’t told about engineering or STEM,” Rooney said. “I just wasn’t taught about it. People were like, ‘Oh, you could be a nurse!’”

Clark College engineering instructor Nicholas Macias has also seen the gap. “Unfortunately, in terms of the number of engineers that I’ve worked with, the majority has been male,” he said. “And in most of the classes I’ve taught, the majority has been male. That’s just where the numbers are right now.” According to Macias, in a typical class of his with 60 students, only about five to ten are women.

During fall quarter of the 2018-19 school year, he taught a Computer Science 101 class with 18 students. Nine of them were female. On the surface, the half-and-half ratio is not all that significant. However, this was the first time he had seen an equal number of men and women.

Despite this, Macias does not believe engineering is an inherently male field. “I mean, there’s obviously something going on,” he said. “I don’t think we’ve figured out what it is.”

Fortunately, efforts to increase gender diversity are in motion. One of the prime examples of this is in the NERD (Not Even Remotely Dorky) Girls Club. The biggest takeaway from the club comes from the bond members feel.

“When you’re the only woman in the class it’s difficult to feel that sense of connection,” Barsotti said. “So NERD Girls allows us to create a community of women who want to study STEM, because NERD Girls isn’t just engineering, it’s all of STEM. But a lot of students are engineering, computer science students.”

The goal isn’t just to spread the word to the girls, though. It was important to let everyone know that engineering is not a male profession.

“I think that’s why it helps when we go to elementary schools and they see a lot of women engineers behind the table,” Sarygin said. “Not only female elementary school students but everybody can see that girls can do engineering.”

Despite the worrying statistics shown today, Clark students are hopeful for a change.