Winter quarter I took a class with Carlos Castro called Race and Ethnicity. Castro was engaging, had a unique perspective in the world and tolerated all my questions and comments. He said that in America he is considered Hispanic, in Nicaragua he is too Chinese to be Hispanic. He also mentioned that he was writing a book that might get him banned from returning to Nicaragua where he grew up. I asked if we could sit down and talk about his new book, what it was about and why he might not be allowed to visit Nicaragua.

Growing up in Nicaragua, he knew that people were not allowed to freely express themselves in writing. He has always thought about his home and why it has never been able to find it’s footing as a true democracy and that’s what his inspiration was for writing this book. “I write poetry, short stories, I write almost everything. That’s why I’m a sociologist. You can use stories to illuminate over some social aspect. My poetry is the same way.” 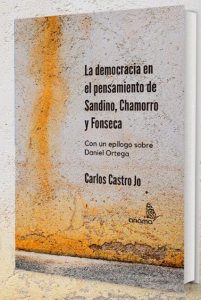 At the end, he included an analysis on the current President of Nicaragua, Daniel Ortega and what his views of democracy might be.

The president is either a Marxist/Leninist, which means that he conceives democracy where the majority is supposed to be in power.

He said Ortega is likely a Marxist/Leninist or is influenced by his mentor, Fidel Castro. “He represents the poor and the poor are the majority,” Castro said. “By that logic he is a democratic president.”

He said he believes that most people who study democracy do not think Marxism/Leninism is a democratic system. “At the end people don’t have a say in how the government is run and whether people can change the president or not,” Castro said.

He also said that Ortega does not believe people should be able to criticize him or threaten his views and that’s what makes it problematic for Castro. If the president reads the book and finds the conclusions unfavorable, he could harass, arrest  or detain Castro if he visited his homeland. He says he has contacts in Nicaragua who will let him know if they think it is safe.

If for some reason he could not return home, he said it would be a great disconnect to him. “Almost any writer is always a very connected to a place and to a history and to the people,” he said. “Not having that connection is one of the hardest things that can happen.”

Castro said he comes from the side of the Caribbean that has a very diverse and interesting population. “Sociology by itself does not capture that because social sciences are about categories of people and people are more than categories.”

Castro sat down with me to talk about his poetry and why he loves to write and where he draws his inspiration from.

All Clark faculty and staff are required to be vaccinated against COVID-19 or be approved for exemption due to religious or medical reasons.

Clark College fires just one employee out of 1,062 — a student worker — for failing to comply with Washington's vaccine mandate. via @zobuhrmaster @ClarkIndyNews

A link for Summoning Spirits is now available!

If you want to embrace the spooky season, join @peterboie tonight at 7 p.m. for his "Summoning Spirits" magic show!

More information can be found in my story for @ClarkIndyNews below!

There’s plenty of things to do in the spooky season. You can watch horror movies OR participate in a free virtual paranormal magic show. Read more below: http://clarkindy.com/2021/10/18/peter-boie-brings-a-paranormal-fright-to-clark-college/