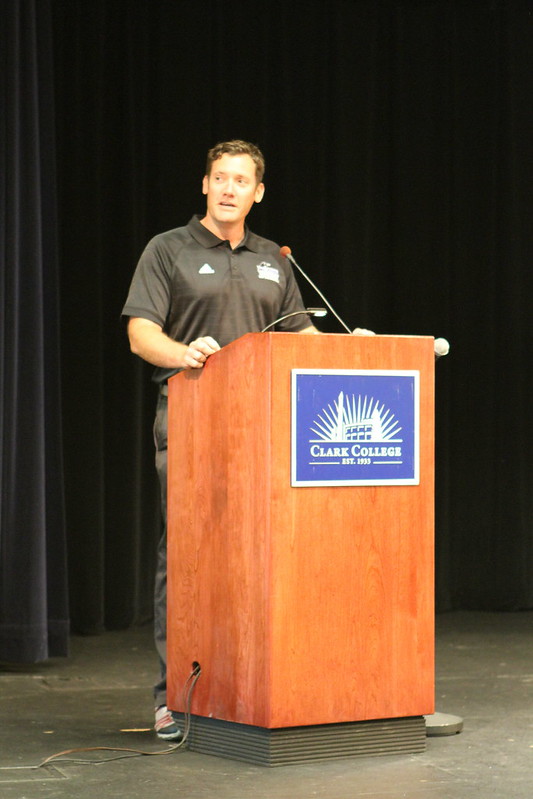 ASCC and the Activities Programming Board hosted the Muffins with the Mayor event today in Gaiser Hall.

Mayor Tim Leavitt was on hand to welcome students to the new school year and answer any questions they had.

The mayor spoke about his time at Clark College and how it prepared him for his continuing education at Washington State University. “I was better prepared for junior level classes than my peers who had been at the four year university,” he said.

He also commented on how things have changed at Clark, but said there was one thing that has not changed since his time there. “I keep forgetting that I have to plan a little extra time to find parking.”

After his opening remarks, he answered students’ questions on the city’s homeless population, veteran support programs, public transit and a possible ban of personal use of fireworks within city limits.

President Bob Knight said it is great to have the mayor available to answer student questions.  “We want our students to be involved in the community,” Knight said. “The more informed they are, the more involved they are.”

Jaime Hudspeth, a second year student, asked the mayor about public transit and if there were any plans to help ease congestion along the I-5 corridor southbound from Battle Ground.

“It’s a long-term plan and these things don’t happen overnight,” he warned.

The Q&A session lasted about an hour, and afterwards the mayor met one-on-one with students.

“I didn’t know about the event until this morning,” Hudspeth said. “It was cool being able to speak directly to the mayor.”